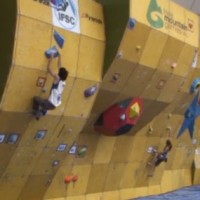 Semi-finals for the Bouldering World Cup at the 2010 Teva Mountain Games are complete with the top 6 finishers from each division moving on to finals tonight at 3:45 PM MST.

The live feed started late? just in time to see Paul Robinson fall near the last move of Men’s #3, a fall that ended up costing him a trip to finals as he wound up finishing in a disappointing 9th place.  Daniel Woods looked to have things very much in control as he was the only competitor to finish all 4 problems including a very powerful Men’s #4 that he put down in short order.

For the women, Alex Puccio and Alex Johnson snuck into finals qualifying 5th and 6th respectively.  The top 6 women all finished the 4 Semi-final problems though so the only thing differentiating them was the number of attempts they took to finish the problems.  Time for the routesetters to bring it in finals!