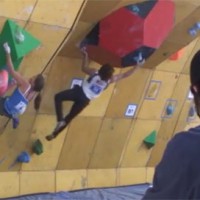 Some live feed is better than no live feed.

That seemed to be the consensus among the 700 7000-odd climbing fans that were watching online as Daniel Woods and Chloé Graftiaux won the Bouldering World Cup at the 2010 Teva Mountain Games in Vail, CO.

Woods ended the drought for American men in Bouldering World Cups in decisive fashion as his 2 topouts meant he was the only male competitor to finish more than 1 problem. As is his habit of late, Woods came out and closed the show in exciting fashion by getting highpoint on Men’s #4 even though his victory had already been sealed. Well done.

Here are the final results with each competitor’s place coming into Finals in () next to their name:

It will be interesting to read reaction from climbers and setters on how they felt the problems went in Finals. As an observer with an admittedly poor vantage point the Men’s problems seemed to revolve mostly around a dyno of some sort which gradually lost its excitement as all the men struggled over and over again to make the huge leap at the end of Men’s #3 and almost all the men struggled mightily to hold the swing on a long jump at the beginning of Men’s #4.

Daniel Woods going for the long move on Men’s #4 For the Women the first 2 problems went down pretty easy, and an unintended sequence on Women’s #2 that allowed a couple of the women to stem their way to the finish hold left at least some of us online spectators scratching our heads about the rules constituting control of a finish hold (apparently just touching the hold is enough?). Women’s #4 did help the comp end on an exciting note though as a send by any of the Women would have given them the victory and a couple of the women came off on the very last move.

Clip from the end of the Live Stream

As I alluded to the event was streamed live on UStream by the folks at Rock & Ice with Executive Editor Alison Osius doing commentary along the way. Overall her commentary was helpful and well prepared with the only real negative in my mind being the occasional cheer into the microphone. The feed itself was somewhat mediocre given that it was from a fixed angle off to one side of the venue which prevented the audience from seeing at least one of the Women’s problems entirely. The single angle also made it difficult to follow the action when the Men’s and Women’s problems were not right next to each other on the wall which was the case for at least half the night.

Compared to the multi-camera setup used at the recent Battle in the Bubble and the comps put on by the ne2c guys, the Teva Mountain Games World Cup live feed wasn’t nearly as advanced. Some feed is certainly better than no feed, but the aforementioned groups really raised the bar as far as live feeds are concerned in my opinion. It seems time for the World Cup at the Teva Mountain Games, to me the premier climbing comp in the U.S., to join them.