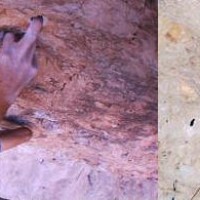 The dust has settled on Chris Sharma sending his project at Clark Mt., which gives us some time to reflect on important things like the name of the route and how hard it is.

The route is being called Jumbo Love, which follows the naming convention of other routes at Clark Mt.’s 3rd Tier/Monastery area.  The other routes are Randy Leavitt’s Jumbo Pumping Hate (5.13d/14a) and Ethan Pringle’s Jumbo Glass (5.14c).

Jumbo Love begins with 60 ft. of 5.12d climbing followed by 100 ft of steep and bouldery 5.14c.  THEN you get to the hard part which is followed by some easier  5.13+ climbing that takes you to the top of the cliff (literally!).  Just think about that for a second.  You have to navigate 160 ft of 5.14c climbing just to get to the hardest parts of Jumbo Love!

Taking this all into account, and using some of his recent FAs in Spain as reference, Sharma feels as though Jumbo Love is likely 5.15b.  Normally, Sharma is not one to speculate on the grades of his climbs, but the Big Up Blog has some insights into how his views have evolved:

Since we’re talking about grades, which we usually don’t get that into around here, I might as well address another one of the obvious questions that will come up: Since when did Sharma start grading his routes? Of course he’s pretty famous for not grading most of his first ascents, but over the past year of living in Spain and climbing constantly on many of Europe’s hardest lines, he’s gotten really familiar with the top end of the rating scale for sport routes. He’s still driven entirely by his sense of aesthetics and personal progression, but these days he’s willing to suggest a number if it seems relevant. “It’s a lot easier to grade a sport climb than a boulder problem,” he told me, “because the moves on a route usually aren’t as weird or as body-type dependent as on a boulder.”   In the case of Jumbo Love he also felt that calling it 9b would be simpler than leaving it ambiguous. “Sometimes if I don’t give a grade, people start speculating, and then it can get all blown out of proportion,” he explained.

Obviously, a route of such high quality and high difficulty is something that many high end climbers would aspire to repeat.  Unfortunately, Clark Mt. is not exactly a roadside crag like Rifle:

Clark is in the middle of a desert wasteland, near Primm, NV. You have to drive over an hour up a horrendous 4WD road, then hike at least another hour in the blazing sun straight up the mountain. Since the pitch is 250 feet long and nearly 45 degrees overhanging most of the way, it’s not easy to work. No toprope rehearsal or trying the moves off a stepladder like Akira or Ali-Hulk. “You need to be fully committed to this route for a long time,” Ethan said.

Can talented American sport climbers like Ethan Pringle, Dave Graham or Daniel Woods get fit enough and spend enough time working the route to nab the second ascent?  Will one of the super strong Euros like Patxi Usobiaga, Dani Andrada or Adam Ondra get super motivated when they see the footage and make a dedicated cross-Atlantic effort?  Time will tell…

One final item to consider is the progression of high-end sport climbing.  Many people consider Sharma’s 2001 ascent of Realization as the benchmark for 5.15a.  The Big Up Blog proclaims that “it’s a safe statement to call it [Jumbo Love] the new benchmark for 9b [5.15b]”.  This should give you an idea of how incredibly difficult it is to push climbing to a new level if it has taken Sharma 7 years of climbing at the highest levels to up the ante by a single letter grade.