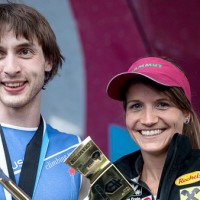 The annual bouldering World Cup at the newly renamed GoPro Mountain Games in Vail, CO has come and gone.  As usual, it was an exciting show filled with an above average presence from some of America’s top boulderers.

For the men it was Russia’s day as Dmitrii Sharfutdinov and Rustam Gelmanov turned in superior performances in the finals, topping 2 more problems than their nearest competitors to take gold and silver respectively.  Jorg Verhoven took bronze which was a nice result for him after just sneaking into finals in 6th qualifying position.  America’s Paul Robinson was looking to return to the podium in Vail—something he did back in 2008—but he had to settle for finishing in 6th position.

The women’s event was quite interesting as both Angie Payne and Alex Puccio emerged from an absolutely punishing semi-final round1 to represent the U.S. in finals.  As has often been the case with the women this year, finals came down to who could execute each problem with the fewest falls.  All three of the top finishers completed all four problems in a total of nine attempts, but Anna Stöhr had fewer tries to reach the four bonus holds so she came out victorious.  Akiyo Noguchi and Alex Puccio both also finished each problem, but it took them both 2 extra attempts to reach the bonus holds with the tie between them broken by a countback to their results in semi-finals.  Angie Payne wound up finishing in 6th position.

If you missed any part of the comp, you can re-watch each round in their entirety here.