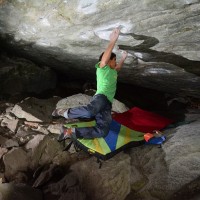 12-Year-Old Mirko Caballero Getting It Done At Home & Abroad

12-year-old Mirko Caballero is over in Europe for the summer1 and his trip has gotten off to a pretty good start on the boulders of Magic Wood, Switzerland. According to his 8a scorecard he’s done three V11s and one V12…and he’s barely been there a week.

Caballero started things off with quick repeats of From The Darkness To The Sunshine and Muttertag, both V11, and then he managed repeats of The Right Hand Of Darkness (V11) and Massive Attack (V12), both on the same day.

Caballero now has nearly 50 sends of V10 or harder on his scorecard which is math math math a lot more than I’ve ever done and I’ve been climbing longer than he’s been alive23.

Prior to leaving the States, Caballero made a trip to Smith Rocks where he notched the 5th 5.14 of his young career with a repeat of Scarface (5.14a).

It’s not all sunshine and quick sends for Caballero though as his effort to climb the Nose on El Capitan in a day did not end with a send, but something tells me that he’ll be back another day.