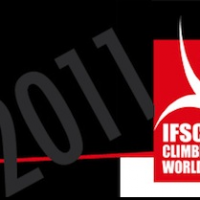 Canada hosted its first ever World Cup event over the weekend when the IFSC bouldering circuit made its way to a snowy Canmore.  The Japanese contingent put on a strong showing with Tsukuru Hori and Akiyo Noguchi winning for the men and women respectively.  Alex Puccio continued her solid season finishing in 6th with Alex Johnson just missing finals in 7th place.  Here are some more results including the finishes of all the American competitors:

Not sure what scores like 1t4 4b7 mean?  Check out this post where I tried my best to explain the World Cup scoring system.

This coming weekend the circuit moves to Vail, CO and the Teva Mountain Games, a venue that has historically been more friendly to the American contingent.  Past notable results include Daniel Woods winning in 2010, Alex Puccio winning in 2009 and Alex Johnson winning in 2008.  With 28 out of the 85 registered competitors for this year’s comp being members of team USA the odds, at least from a numbers perspective, are in favor of another strong showing by the U.S.

Update: Huge gallery of high quality pictures from the comp

Last weekend marked the initiation of my first World Cup experience. And my-oh-my, it sure was an eye-opening event in more ways than one. I have never seen so many extremely talented and beastly competitors warming-up their weapons in one isolation.