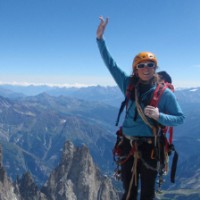 Here are a few notable sends that caught my eye recently:

Unfortunately the biggest news that happened over the weekend was the untimely passing of Belgian Chloé Graftiaux who took a fatal fall while descending the L’aiguille Noire de Peuterey on Mont Blanc in Italy.  Best known here in the U.S. for winning the World Cup bouldering event at the 2010 Teva Mountain Games, Graftiaux was just 23 years old.  You can leave comments of condolence on her website here.