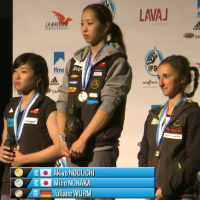 The 8th and final stop on the 2014 IFSC Bouldering World Cup circuit took place this past weekend in Laval, France, and it was Japan’s Akiyo Noguchi winning another gold for the women while Russia’s Rustam Gelmanov took gold for the men.

For the women it was Akiyo Noguchi continuing her domination of the 2014 season with her 4th consecutive victory, sealing her position atop the overall podium for the season in the process.  Shauna Coxsey finished in 5th which was good enough to solidify her 2nd place finish in the overall rankings.  American Megan Mascarenas, who finished 4th in her World Cup debut in Vail, finished in 15th place. The wind was taken out of the sails of the battle for the top spot in the Men’s rankings when Dmitrii Sharafutdinov failed to make it out of the qualifying round, securing the overall title for Jan Hojer who would go on to finish 4th in Laval.  It was the other strong Russian, Rustam Gelmanov, who would send all four finals problems to win the final World Cup of the season in front of Guillaume Glairon Mondet and Jeremy Bonder.  Strong day for the French men as they put four men into the final including legendary climber Stephane Julien who finished 3rd overall way back in 2007. I was in the mountains all weekend which meant not much time to watch the live feed, but I will try to post some highlights here once I get a chance to re-watch finals.