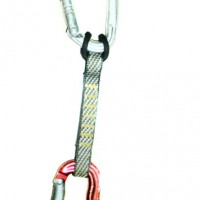 After a lot of speculation over the weekend, according to Grimper the police have released an image of a quickdraw slung like those that were responsible for the tragic death of Tito Traversa last week.  As you can see, the only thing holding the top biner to the dog bone is the rubber band which is not meant to hold a climber’s weight.  According to reports, 8 of Tito’s 12 quick draws were slung like this and they happened to be the last 8 he used which is what led to his fatal ground fall.

Hopefully this accident can serve as powerful reminder for us all to be more diligent about checking all our gear, whether it’s our own or it’s gear brought by someone else, or, increasingly, it is gear of unknown origin left on a climb for all to use.  Many of us may think that we would never had made this particular mistake, and that may be so, but there are plenty of other areas where mistakes can be made.