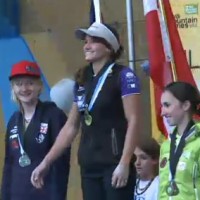 The Vail Bouldering World Cup at the 2012 Teva Mountain Games took place over the weekend, and while it wasn’t the best weekend for the American contingent, it certainly didn’t lack for excitement.

For the men it seemed as though Germany’s Jan Hojer was on his way to victory as he easily flashed the first three problems.  He was stymied, however, by a hand jam sequence on the 4th problem which knocked him down to 3rd place as both Austria’s Kilian Fischhuber and Canada’s Sean McColl were able to top that problem out.  Fischhuber narrowly edged McColl for the gold based on how many attempts it took them to finish all four problems.

For the women it was more gold for Austria as Anna Stöhr held off a game field as she was the only woman to send all four boulders.

Here are the full results:

To watch someone absolutely crush the first 3 boulders and to get shut down by what boulderers would call a “party trick” is hard to watch. After 3-4 tries, I realized he was probably not going to do the problem. Kilian who was beside me felt the same. He said to me “I don’t want to win like this”… and it’s true. Even though I knew I’d come second instead of third, it wasn’t in the way I wanted. Jan was stronger than both of us in finals.