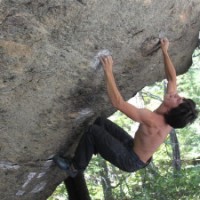 The 2010 Triple Crown Bouldering Series kicked off last Saturday at Hound Ears, NC with a pair of familiar faces besting the field as last year’s overall Triple Crown winners Kasia Pietras and Jimmy Webb both started the 2010 edition of the series with victories.  If you are scoring at home Webb has not lost a Triple Crown event since the 2008 Hound Ears comp where he took a close 2nd to Jon Glassberg (at least according to my count).

Here are the top 3 finishers for each of the open divisions.  More results can be found on the Triple Crown website.