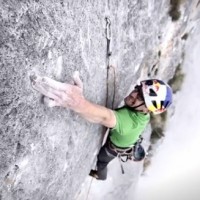 Solo per vecchi guerrieri from Damiano Levati on Vimeo.

Boogie ’til You Poop from Cedar Wright on Vimeo.

While shooting my Squamish in a Day video, Jason Kruk got his knee stuck in a 5.11 offwidth called “Boogie ’til You Puke.” Luckily Andrew Burr was there shooting stills while I shot video and switched his 5d to video mode to capture what is perhaps the most horrific and hilarious climbing experience I have ever witnessed first hand. By this end of this short movie, you should understand why the climb is now officially renamed “Boogie ’til You Poop!”