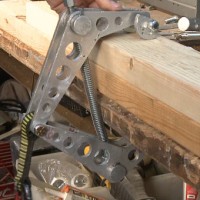 Just a few short months after first posting about it the web based TV show The Season, which followed athletes in a variety of outdoor sports as they progressed through a season of their respective sports in the Pacific Northwest, came to an end last week.

Looking back I enjoyed the show quite a bit.  There were certainly ways it could be improved if it were to be done again, but I still enjoyed it for what it was.  It was free (which is never bad) and I appreciated the opportunity to learn more about other outdoor sports since I tend to spend most all of my time in the bubble of climbing.

While I did enjoy the stories from the non-climbing athletes this is still a climbing blog and I’m still obsessed with climbing to the point that it usually hurts.  With that in mind, here are the episodes from The Season that chronicle climber Matt Maddaloni‘s journey to create an experimental new piece of trad gear dubbed the “anti cam”.

The Season Episode 6 from Fitz Cahall and Bryan Smith on Vimeo.

Matt Maddaloni used climbing as a vehicle to explore the world, but found there was a limit to his body. He could only climb so hard. To maintain his passion he had to find new ways to push himself. This season, Matt decided to create a new experimental piece of climbing gear and put it into action.

The Season Episode 9 from Fitz Cahall and Bryan Smith on Vimeo.

Matt Maddaloni has decided to move forward with the anti cam. First, he’s got to go inspect the hanging flake high on the Squamish’s famed Grand Wall. Will it go?

The Season Episode 15 from Fitz Cahall and Bryan Smith on Vimeo.

The Anti Cam is ready for testing. Matt is about to find out whether his vision is pipe dream or possibility. He’s going to have to start taking whippers on this new piece of gear. Shot in Squamish at the Smoke Bluffs.

The Season Episode 21 from Fitz Cahall and Bryan Smith on Vimeo.

It’s come down to the wire. Matt’s foot and ankle took longer than expected to heal. He couldn’t climb again until this winter, but in his free time he went to work redesigning the anti cam. Now he’s got three shiny pieces of gear, a renewed enthusiasm and a date with the guillotine flake.

The Season Finale from Fitz Cahall and Bryan Smith on Vimeo.

That’s it. That’s all. After a year and half of work, the Season winds down, but not before we catch up with Matt as he tries to free climb the guillotine flake high on the grand wall.

3 Responses to The Anti Cam