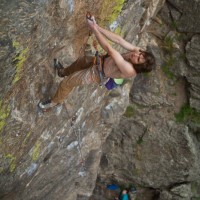 Another Hard 5.14 FA By Daniel Woods In Clear Creek Canyon

Back in March Daniel Woods announced his return to sport climbing with the FA of Mourning Glory, a hard 5.14 in Colorado’s Clear Creek Canyon.  It was there again where Woods did the FA of the so-called “Mission Impossible Project” the other day dubbing the resulting line Mission Imposible1 and suggesting a grade of hard 5.14 for the line which features multiple double-digit cruxes.  The route was bolted last year by Jay Samuelson who posted this challenge on Mountain Project:

Your mission Mr Phelps, should you choose to accept it, is to ascend the sweeping gray, green, and orange face to the left of Interstellar Overdrive. This mission is wrought with dead-ends, danger, and misery for the few who dare attempt the Impossible. Your entry exam shall be slab climbing that is slightly overhung which will immediately deposit you into the crux; survive the mental and physical torture of the next two bolts and you might just breathe the rarefied air of the upper headwall. Don’t breathe too easy though, as traps and tricks are waiting to spit you back to the realm of mere mortals. Should you fail, we will disavow any knowledge of you and your mission.

In comments to Climbing.com Woods indicates that the route felt like his hardest yet—harder even than Jaws II—and he also commented on the breakdown of the route which is well worth reading if you’re into that sort of thing.

Footage of the send was captured by none other than Paul Robinson so look for that somewhere at some point.

8 Responses to Another Hard 5.14 FA By Daniel Woods In Clear Creek Canyon