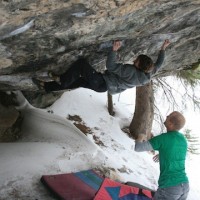 Around this time of year two years ago Daniel Woods repeated Terremer (V15), did the FA of The Game (V15) and Desperanza (V15) and won ABS Nationals all within a 30-ish day span.  Last year he stumbled at ABS Nationals but had success outside with that 74 point day at the Hueco Rock Rodeo and the 2nd ascent of Warpath (V14).  This winter is shaping up to be more of the same.

Fresh off winning three comps in the last month1 and repeating a couple of V14s, Woods made the trek north to a cold RMNP to tackle a project spotted last year by Jamie Emerson.  Here’s how Woods described the problem on his facebook page:

The boulder is a giant 65 degree overhanging ships prow, which jolts out of the hillside. There is just enough room for a landing to work the crux moves. If you pitch from the top, you will take a 20 foot fall downhill into the river. There are 5 movements covering 15 feet of near horizontal climbing. The crux revolves around 2 high tension foot moves to a hard right foot kick over to the right side of the boulder. The first two holds are very slopey with no opposition and the upper holds are two quarter pad incut crimps. It is a good full body power test, along with extreme crimping.

Woods was able to top the boulder out yesterday, calling the new problem Paint It Black and suggesting a grade of V15.  Incidentally, this boulder is not far from Hypnotized Minds which is another V15 in RMNP that was established by Woods.

Here’s a bit of footage of Carlo Traversi and Jonny Hork trying what would become Paint It Black last year:

I don’t know that the name of the problem has anything to do with this song from The Rolling Stones, but it’s been in my head all morning so watch this video and put it in your head too…