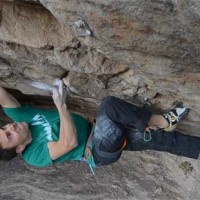 Over the past couple of years Jonathan Siegrist has steadily ticked off most of the hard sport climbs in the U.S. Routes like Necessary Evil (5.14c), Kryptonite (5.14d) and pretty much every established route at the Red River Gorge are just a few examples. Of late he’s focused his attention on new routes like Pure Imagination (5.14d) in the Red and Shadowboxing (5.14c) in Rifle, as well as a project in Arrow Canyon outside Las Vegas, NV.

It was this project in Arrow Canyon that finally seemed to really test Siegrist, pushing him to persevere through the ups and downs associated with freeing a new route at ones limit. Last week, after some 30 tries spread across several weeks, Siegrist broke through and succeeded in freeing this project, calling it Le Rêve :

It’s clear to me that this route defines a new category of difficulty for me. Le Reve took twice the effort of any route I’ve done save maybe one of my first 5.14s. It seems silly to imagine calling this route 9a (5.14d) right alongside climbs that I did in a matter of 4, 5, or 6 days. However, I also feel unqualified to propose that this route is worthy of the 5.15 grade, seeing in that I’ve never so much as touched a route of said difficulty. In the end, to me it’s simple: I couldn’t care less. This route provided a new level of challenge for me, and demanded more from me as an athlete and a person than any route I’ve managed to complete before. In that I’m proud and I’ll happily accept my victory.

Rock & Ice caught up with Siegrist for an interview to discuss the route and you can watch video of him on it by clicking the image below.