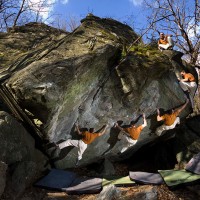 Via 27Crags comes word from the Italian site Alta Montagna that Adam Ondra has done the first repeat of Christian Core’s much sought after problem Gioia in Varazze, Italy.  The problem was opened in 2008 by Core at a suggested grade of V15, but over time V16 seemed be thrown around more when referring to this problem.  Based on the Alta Montagna article it seems as though Ondra agrees with the latter number.

This ascent comes on the heels of Ondra opening a potential V16 called Terranova at his home area just a few weeks ago.  You can see more pictures of that problem in this gallery.

Update:  Here are a few pictures taken of Ondra working the problem