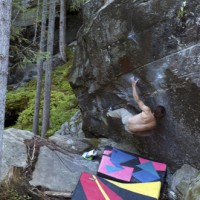 Despite some challenging conditions Dai Koyamanda, Adam Ondra and Daniel Woods have all been getting it done on the boulders of Switzerland of late.

Koyamada has spent much of his time escaping to the higher elevations at Sustenpass where he’s done the FA of Paradise Lost (V13/14) and Daedalus Direct (V14/15).  He’s also repeated Daedalus (V14) and Phase 2 (V14).

According to his 8a scorecard Adam Ondra spent last weekend braving the less than stellar conditions in Magic Wood.  On Saturday he repeated Chris Sharma’s Practice Of The Wild (V15), and on Sunday he sent both Remembrance Of Things Past (V14) and the recent Dai Koyamada addition Dark Matter (V14).

Also in Magic Wood was Daniel Woods who claimed the FA of the sitstart to Muttertag.  The sit start adds a two move V13 into the one move V11 of the stand.  He gave the new line a name of Mystic Stylez and a suggested grade of V151.