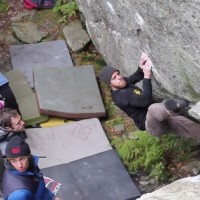 The 2011 Triple Crown Bouldering Series got underway last weekend1 at Hound Ears, North Carolina, an area open to climbing but one day a year for the Triple Crown.

While the entire Triple Crown is more about raising awareness for access issues and offering a competitive but still fun environment for the  community as a whole, I always find it interesting to note who is winning the Open division throughout the series.  The main question in my mind leading into this year’s series was could anybody dethrone Jimmy Webb, winner of the last eight Triple Crown events and reigning 3 time overall champion.  The answer is that we’ll never know since Webb decided not to compete this year.

DPM was on hand for the event, and they compiled this report to go along with this video.  There’s also a large gallery of images posted here.

Jimmy Webb and Brion Voges, who took 2nd in the overall standings each of the past two years, both didn’t compete in the comp, but that doesn’t mean they weren’t at Hound Ears taking advantage of the day.  Freed from the pressure of focusing on filling out a comp scorecard they each established a new double digit problem, both of which you can see in this video.

Update:  In his latest blog post Webb indicates that he will in fact compete in the remaining events.