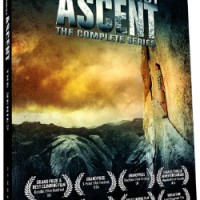 It’s been rumored for some time but now it’s official:  Sender Films’ First Ascent: The Series will finally be airing in the U.S. starting this week on The Travel Channel.  Available in some 95 million homes, the Travel Channel will begin airing episodes from the series beginning this Thursday, November 4th in a 2 hour block starting at 9pm EST.

Thursday’s airing will include the following four episodes:  Alone On The  Wall, Point Of No Return, Fly Or Die and The Impossible Climb.  For more information on what’s in each episode check out this post from when the DVD box set was released back in August.

Nick Rosen and Pete Mortimer of Sender Films will be appearing on the November 3rd edition of Last Call With Carson Daly on NBC to help promote the series so be sure to check that out if you’re interested.

‘First Ascent’ will begin airing on The Travel Channel (95 million homes) on November 4th at 9 pm EST (7-9 MT) as four back-to-back episodes in a two-hour block, then will repeat immediately after. The entire six episode series will be regularly scheduled through the remainder of 2010 and into next year.

A co-production with Sender Films and National Geographic International, ‘First Ascent’ includes six wild episodes that tell the stories from the cutting edge of climbing. These episodes include Alex Honnold’s mind-blowing free solo of Half Dome in Yosemite National Park, Dean Potter’s latest and wildest attempts to merge climbing and BASE jumping, and the tragic tale of Jonny Copp and Micah Dash’s final expedition to the big mountains of China.

“The series is our proudest achievement yet, a culmination of years of production, with storytelling and cinematography that take our work to a new level,” said Nick Rosen of Sender Films, “It’s also the first of its kind to be broadcast on television worldwide.”

According to Cathryn Garland, The Travel Channel’s Head of Acquisitions, “‘First Ascent’ is one of the most visually stunning, jaw-dropping adventure-travel series we’ve ever seen. We knew we had to have it.”

‘First Ascent’ has already aired in over 100 countries around the world, including on National Geographic Channels in Europe, Asia and Latin America, BBC in Scandinavia, and Red Bull Media in Germany.

Peter Mortimer and Nick Rosen of Sender Films will be appearing on Last Call with Carson Daly on late Wednesday night, Nov 3 to promote the airing with a behind the scenes look at the ‘First Ascent’ series.