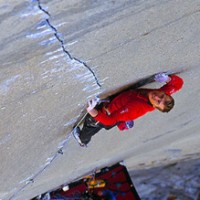 There is a new free route on El Capitan and it’s not the route that was getting all the attention lately.  Rather it’s a route 10 years in the making which finally succumbed to the dedicated efforts of Leo Houlding and Jason Pickles.

Dubbed The Prophet, this new route forges its way up the east side of El Cap with the stunning “A1 Beauty” pitch, the route’s penultimate,  forming the crux.  On a previous trip this past summer Houlding had led all the pitches free except for the A1 Beauty so the pair returned to Yosemite this fall for another go at the line.  Fighting bad weather and a looming departure, Houlding was finally able to free the A1 Beauty and top out the line last Wednesday to add a new free route to El Cap.

Tom Evans of the El Cap Report was there to watch it go down:

He started well, moving in his smooth, measured style.  He squeezed his finger tips into the narrow crack, the so called, A1 Beauty.  He stemmed and liebacked, crimped and stepped high with his great footwork.  Soon he was at the spot he used to rest for some time yesterday, before trying the hardest part.  This time he chalked a couple of times and went to meet his fate.  He rose to the challenge and moved smoothly past the rounded arete that had sent him flying yesterday.  He made an outrageous dead point lunge and just grabbed a key hold that allowed him to move left, off the arete and onto some more positive holds.  A wild move left and soon he was at the belay.  Tommy, Kevin, Becca, and others in the meadow, sent up a loud roar of approval and Leo called back.  It couldn’t have been sweeter!”

Check out the rest of Evans’ post for the full report and several pictures.  UKClimbing has more background on the route and they’ll also have some exclusive video from Posing Productions so be on the lookout for that.

Update: Hear Houlding talk about the ascent here – “Right now it’s almost more relief at having not failed than joy at succeeding”

Update #2: Planetmountain interviews Houlding and gets some more specifics on the difficulties of the climb

← How Does Your Local Wall Stack Up?
Sender Films’ First Ascent Series To Air On The Travel Channel →