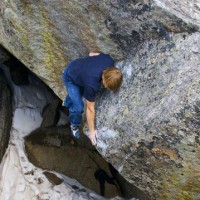 Much like last year when he made quick work of several established problems at Mt. Evans and again when he FA’ed or repeated several double digit problems at Hueco Tanks earlier this year, Nalle Hukkataival is making his trip to the U.S. this summer count.

Early last week he made quick work of Jade (V15) in RMNP for its 4th ascent before turning his sights toward a sit start project to an existing V10 highball at Mt. Evans first done by Cam Cross.  Enticed by pictures of the project from Carlo Traversi and Jamie Emerson (who presciently blogged that “when completed, this will be the best problem at Mt. Evans”) Hukkataival set out for Mt. Evans with Jon Cardwell, Chris Schulte and Traversi to have a look.  Here is how he described what they found on his blogsite:

I wanted to go try a project at area B, that I had seen photos of earlier this week. I thought it looked really good in the photos, but when we got up there I was blown away. This tall and proud line climbs a sloping rail on a perfect steep overhang, leading to a horrifying mantle high off the deck. It has a good obvious starting hold and about 21 moves, all of them upwards. The bottom part climbing into the stand is probably around V12 and after that you still have to do do stand start which is a technical highball V10. At the moment there is still snow on the landing making it possible to take falls without getting hurt, but when the snow melts it will most likely be a death landing.

Despite testing out the bad landing with a rough fall on his face, Hukkataival persevered and pressed out the exciting mantle to create Sunseeker (V13).  Traversi had to settle for the 2nd ascent a day later after falling from the last move an hour before Hukkataival’s FA.  Commenting on his 8a.nu spraysheet Traversi says that Sunseeker, “could be one of the best boulder problems in the world. 20-25 feet with a snow landing (for now). Tall, Proud, Pure, Technical, Powerful, and Balancy. FULL PACKAGE.”

Visiting climbers swooping and nabbing the FA of coveted projects is nothing new, but Jon Glassberg raises an interesting point about this in a recent post on his blogsite:

There has been a frenzy of activity at Mt. Evans involving strong climbers trying to send the Super Proj at Area B dubbed Sunseeker by Nalle Hukkataival who made the first ascent in a few hours work. I know that Carlo T., Max Z., and Chris Schulte have been putting a lot of effort into the problem over the past week or so, cleaning the line on toprope, hauling in stacks of pads, and working out beta…

Is it poor form to come in and scoop up first ascents without doing any of the legwork? Or is it someone else who is at fault for telling the strong climbers that hard gems are waiting to be plucked? Any thoughts? I’m sure Carlo was pretty bummed after falling off the last hold only minutes before Nalle put the send down, after being spoon fed beta.

I don’t know any of the principles in this instance, but since both Traversi and Schulte helped carry pads and spotted for Hukkataival I’m inclined to believe that it isn’t a big deal in this case.

In other Mt. Evans news, Paul Robinson has set his sights on another undone project at Area B and video of Chris Schulte’s ascent of Big Worm (V14) is now up at DPM.