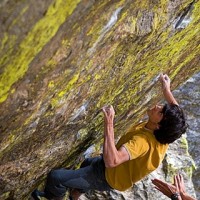 The 2007 Summer bouldering season in Rocky Mountain National Park was one that will undoubtedly be looked back on as one of the most prolific in the short history of bouldering in the Park. By my unofficial count there were at least 7 V11 or harder new problems established and over 30 repeats of those problems. Aided by a plethora of world class boulderers like Daniel Woods, Ty Landman, Paul Robinson, Sean McColl, Dave Graham, Tony Lamiche and others spending extended amounts of time, the number of double digit problems climbed was astounding.

Coming into the season last year, the problem on everyone’s mind was the so-called Green 45 project that Daniel Woods would later call Jade (V15) after his FA in June. It was repeated in short order by Ty Landman and Paul Robinson (pictured at left courtesy of Steve Woods). Other notable new problems from last year were Paul Robinson’s Don’t Get Too Greedy (V13) and Nick Sherman’s Wildcat (V12). Women also had a good year with Ashley Lloyd becoming (I think) the first woman to climb a V12 in the Park with her repeat of Super Kind.

It seems doubtful that this upcoming season will be as productive with no Jade-like projects on the horizon and Daniel Woods in Europe and Paul Robinson in South Africa half the summer. Hopefully the below videos will help get your juices flowing for whatever project you have in mind, wherever it may be.

Due to the size of the list and poor load times with all the videos on one page, I split them up into 4 separate pages for your enjoyment:

Last year I made a few predictions about the Colorado alpine bouldering season that proved to be true. Look for 2008 to be the year of the female climber in the Park…