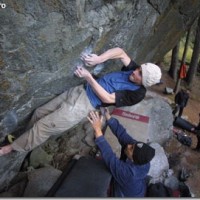 And now for some news and other tidbits…

Dave Graham on New Base Line …I’m simply fascinated by really difficult single moves. On a 20 move Font 8c I can usually immediatly do all the moves, so it’s just a question of stamina… and this motivates me less at the moment. I like trying things where in the beginning you don’t even know if it’s physically possible.