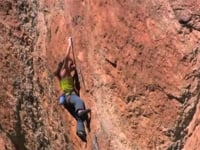 French climber Alizée Dufraisse has repeated the climb Patinoso (5.14c) in Siurana, Spain. According to ukclimbing.com, she was aiming to climb the route Chikane, an 80-foot 5.14c in the Campi Qui Pugui sector. She instead redpointed Patinoso, a 130-foot endurance route in the El Pati sector. This is Dufraisse's first of the grade; previously, she had climbed two 5.14b's, including l'Arcadémicien in Céüse in 2010—a 5.14b established by Sylvain Millét that had not seen a repeat since a hold broke on the route.
~Climbing Magazine