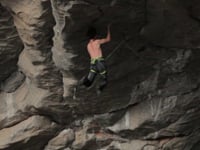 As it were I just happened to be in the Flatanger cave (Hanshallaren) when Adam sent his latest project: Move.
I had walked up to the top of the cave, initially to take some pictures of his attempt, but as Claudia was already there (http://www.claudiaziegler.com), I decided to shot some video instead.
I started filming just as Adam left the kneebar after the first 8b part, so the meat of the route is all here.

It´s shot whit out a tripod and mainly at 200mm zoom so there might be some slight shaking. I was also lacking a mic, so there is quite a bit of wind noise.
I´v not bothered with any timelapses, nature shots or even any colour adjustments as I am busy enough with other projects at the moment. (To read more about it check out: www.Madskillzmedia.com)
The beauty of the surrounding landscape will hopefully be better portrayed in Petr and Adam´s new film: Change

To see some better interviews and some work footage check out Petr´s version!
ADAM ONDRA - WORKING MOVE 9B/+ from BERNARTWOOD: https://vimeo.com/72992600

Leave a Reply to Q Click here to cancel reply.