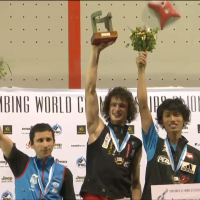 Just three weeks after winning the 2014 Bouldering World Championships, Adam Ondra secured the 2014 Lead World Championships in Gijón, Spain with a narrow victory over Ramon Julian.  After taking a few years off from competing to climb the hardest routes in the world, Ondra put the world on notice that he was focusing on competitions this year.  Despite a few early hiccups in some of the Lead World Cups, he has thus far managed to win one Lead World Cup, take 2nd at a Bouldering World Cup and now the incredible double in the World  Championships.  This kid might be good.

Full results can be found on the IFSC’s website.

You can watch a full replay of the final here: