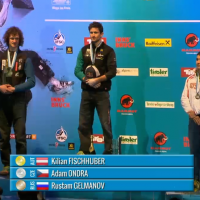 For the women, Shauna Coxsey started strong being the only woman to climb the first problem, and she looked, at least initially, like she could not be beat.  The final result was in play until the last moments though as Anna Stöhr could have won with a top of the very difficult last problem.  Stöhr was not able to pull it off, however, and Coxsey took home a very well deserved second consecutive gold medal.

The men’s competition was a tight battle throughout on a set of problems that were completed by the top three competitors.  It was Adam Ondra, competing in his first bouldering World Cup in some years, looking unassailable with quick flashes of the first two problems and quick sends of all four boulders.  Veteran competitor Kilian Fischhuber was able to keep pace though as Ondra stumbled ever so slightly on the last two problems, opening the door for Fischhuber to flash the final problem to secure the victory on account of taking fewer attempts to finish all four problems.

The World Cup circuit takes a bit of a break now, returning in two weeks in Hamilton, Canada.

The night was not without some controversy though as Ondra was called off by officials on his first attempt on the final problem due to what was deemed an incorrect starting position for him.  After a moment of frustration he would pull on and easily do the problem.  My understanding of the scoring is that he would have won had he flashed this problem based on having fewer attempts to his four bonuses than Fischhuber1.

My understanding of the rule in question is that it has to do with a rule adjustment implemented this year by the IFSC, at the request of the athletes, which requires the competitors to establish all four of their limbs on designated holds on the wall before commencing with their attempt.  Ondra apparently did not set his 2nd foot before moving on, which is why he was apparently called off.  A similar thing happened to Shauna Coxsey on her flash attempt on the third women’s problem, although in that case she wasn’t called off until she was half way up the problem which was quite off-putting for her.

To illustrate the point, here you can clearly see that Coxsey does not set her 2nd foot on a marked hold before starting

Here are a couple of other highlights from the finals broadcast:

In a comment on 8a.nu, Adam Ondra had this to say about what happened:

I grabbed the starting hold, put my left foot on starting foothold, kicked with my right foot into an area where I expected to hit the foothold. I felt the impact, I thought that must have been the foothold and went for another move straight away. But I was warned by the judges that the start was not valid, as I didn’t touch the foothold according to them. Even though it seemed to me that I did touch it, as it could have seemed from the livestream as well, I talked with more witnesses who could see very well that I did NOT touch it. No injustice happened to me, I just made stupid mistake and that’s it.

Leave a Reply to 12busch Click here to cancel reply.