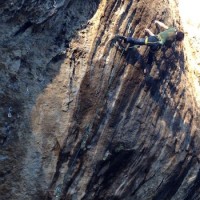 Nearly three years after its long-awaited first ascent, Adam Ondra has done the long-awaited second ascent of Chris Sharma’s First Round, First Minute (5.15b) in Margalef, Spain.  FRFM gained enormous attention even before Sharma did the FA as the route was not only Touched By The Hands of Sharma™, it was also featured in numerous videos, and it was even the source of some real serious internet controversy way back in 2010.

Ondra was spotted trying the line last November, and he indicated in an interview with Evening Sends that repeating the line was a priority:

I would like to finish off First Round, First Minute. I tried for two days this autumn (unfortunately didn’t have more time) and got surprisingly close after merely two days of work.

The news was first picked up by the Spanish-language site RocanBolt, which indicates that Ondra has confirmed a grade of 5.15b for the route.

Update –  PlanetMountain has the interview, as usual, with Ondra after the ascent:

When he [Chris Sharma] first tried it he was using a much harder beta, and fell off that last section about 50 times. He eventually worked out an easier sequence and then sent it relatively quickly, but when you try something for so long it’s hard to get a proper feel for things. I used that easier beta, too, and I’d say 9b fits perfectly.