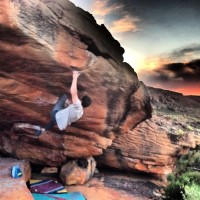 As usual it’s been a busy time for visiting climbers down in Rocklands, South Africa.

Highlighting the news of late has been Jimmy Webb who has been doing, frankly, what Jimmy Webb does.  Webb touched down in South Africa a couple of weeks back and from the looks of his scorecard not much has slowed him down.  He’s managed to repeat problems like Golden Shadow (V14), Derailed (he says V13, 10 of 11 other repeaters on 8a say V14) and Mooiste Meisie (V13).

In addition, Webb has managed two very noteworthy flashes in The Vice (V13) and Sky which is listed at V14 by 8 of the other 9 people who have logged it on 8a.  Ever the Brave & Humble™ climber, Webb suggested V13 and had this to say about it on his scorecard:

One of the best feelings i’ve had in climbing. Such a rad bloc. Props to Daniel for establishing this incredible line. Fit me perfectly. 8B+ flash sounds nice but this is just not the case. At least for my height.

In other Rocklands news, Idaho’s Matt Fultz made his first foray down to South Africa and came away with an impressive ticklist that included repeats of V14s Sky, King Of Limbs and Derailed.  Also on a similar send train was Aussie James Kassay who managed a repeat of Amandla (V14) in addition to the three V14s Fultz completed.

9 Responses to Jimmy Webb Flashes Sky And Other Rocklands Notables

Leave a Reply to Dan Click here to cancel reply.