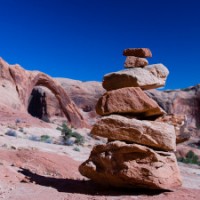 After a few days of climbing in Joe’s I was ready for a break, so I decided to make the short drive to Moab for a couple of days of active rest.  I plugged Moab into the GPS on my phone and saw there were a few possible routes, one of which cut straight east out of Castle Dale on what barely looked like a road.  Hungover, and in the mood for a little adventure, I set out down the road hoping it would lead me…somewhere. The route I was supposed to take was the pink line straight east out of Castle Dale in the map above.  Unknown to me at the time, I ended up striking out south on the orange line about half way through the drive which took me on the best wrong turn I’ve ever taken.  Soon enough the flat, dirty road I was on led me into a series of canyons lined with huge sandstone walls.

Around one corner was the Buckhorn Wash Pictograph Panel. I couldn’t recommend getting lost on this road more highly.  Whether you’re looking for a rest day activity while in Joe’s or looking for a more adventurous route to connect Orangeville and Moab, this was some of the coolest terrain I saw during my time in Utah.  This isn’t a great route if you’re in a hurry—I must have gotten out of my car a dozen times to take pictures and stand agape at the scenery—but I don’t think it took me more than 3 hours which isn’t too terrible either.

Eventually I found my way to Moab which also did not suck.  I did a few hikes and spent a “rest” day bouldering in Big Bend which is worth visiting solely for the absurdly sandbagged “V4” Circus Tricks.

Moab from “The Portal” trail ← Layton Kor Dead At Age 74
I Did Not Know That. I Learned Something Today. →