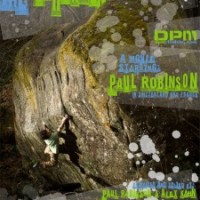 Reviews Of The Schengen Files, The Swiss Account, Better Than Chocolate & Midwest Unknown

A chance for you to win something for free and a few thoughts on The Schengen Files, The Swiss Account, Better Than Chocolate and Midwest Unknown just as soon as the cops are done swiping my credit card… The Schengen Files is a short ~20 minute video that chronicles some of the hardest sends from the latter portion of Paul Robinson’s recent stint in France and Switzerland.  The movie starts with Robinson repeating a couple of the more well documented problems in Font and closes with rare repeats of lesser seen problems like Trip Hop (V15) and Angama (V15) in Font and The Story Of Two Worlds (V15)in Switzerland.

Almost entirely shot and edited by Robinson and girlfriend Alex Kahn, The Schengen Files is beautifully done, which belies the fact  that this is really their first major filmmaking effort.  If one of the only negatives people can come up with after seeing the movie is that they want to see more then, I think Paul and Alex are on the right track.

For under $7 this movie is a no brainer for any fan of bouldering videos. Like The Schengen Files, Better Than Chocolate is another example of the evolution of climbing media these past few years.  The movie is the first effort from Haroun Souirji who describes the movie as “a one man low budget project about bouldering in Switzerland. It’s edited, filmed, produced and advertised alone.”  Well, he could have fooled me because the movie has a nice polish to it and is tightly edited throughout.

The hour long movie is sort like if you would hit the random button on your MP3 player as it features a random assortment of climbers and problems from throughout Switzerland.  For the American audience many of the climbers will likely be unfamiliar, but there is footage of Paul Robinson sending Ill Trill and the variant to From Dirt Grows Flowers as well as appearances from familiar names like Chris Webb Parsons, Michele Caminati and a brief cameo by Fred Nicole.

Again, for fans of bouldering videos this is most certainly worth adding to your collection. The Swiss Account is the story of three Americans (Jon Glassberg, Connor Griffith and Carlo Traversi) visiting the boulders of Switzerland with very brief guest appearances  made by the likes of Paul Robinson, Adam Ondra, Alex Puccio and Dai Koyamada.  What ensues is pretty much what you would expect:  climbing, antics, beautiful scenery, more antics, controversy and tons of amazing looking granite boulders.

Your enjoyment of the movie may vary depending on your tolerance levels for non-climbing shenanigans and techno music, but the quality of the footage is generally pretty good and the quality of the boulders is well established at this point.  I personally thought the sequence where Traversi gets pulled over for speeding and has his credit card swiped by police on the spot was a highlight of the movie, but I’m guessing he might beg to differ.

At almost an hour The Swiss Account would be worth dropping some money on to watch, but thanks to sponsors like Revolution Climbing, La Sportiva, Five Ten and Verve Clothing the movie is 100% free.  Seriously. This last video is not really on the same level as the previous three, but I wanted to share it since it has a local connection to boulders I’ve actually climbed on.  Filmed and edited by Ian Cotter-Brown, Midwest Unknown gives  a taste of the bouldering in Wisconsin and Minnesota at areas like Governor Dodge, Rattlesnake Mound, Taylors Falls and Devil’s Lake.  The quality of the footage and the editing are not of the highest quality, and it’s probably overpriced when compared to the other offerings out there right now, but if you’ve ever thought about bouldering in Wisconsin then this movie could be worth checking out.

If you made it this far then congratulations.  Here’s how you win free stuff.  Simply leave a comment on this post and you’ll be entered for the chance to win a free download (including extras) of Better Than Chocoloate.  The winner will be picked one week from today (8/18/2011).  Good luck!

86 Responses to Reviews Of The Schengen Files, The Swiss Account, Better Than Chocolate & Midwest Unknown