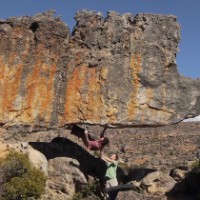 Via The Goat comes another example of bouldering being covered by more mainstream media sources, this time it’s Reuters writing about the bouldering in Rocklands, South Africa:

“The whole climbing thing has caught us a bit by surprise,” said Thys Kruger, owner of De Pakhuys outside Clanwilliam, one of a half dozen farms offering no-frills accommodation for climbers.

“It’s grown tremendously from 2004, when we had maybe 34 climbers. This year I’m expecting in excess of 500, mostly international climbers. Some of the top guys in the world climb here,” Kruger said.

“When I bought the farm, I thought ‘what can I do with all these rocks?’ Now I’m farming the rocks.”

Kruger estimated that climbers would pump from 4-5 million rand into the economy of Clanwilliam this year.

Rocklands is high on my list of destinations for either next summer or the summer after, depending of course on which one aligns best with an injury free period for me.

← First 5.14 For The Other Alex Johnson
Reviews Of The Schengen Files, The Swiss Account, Better Than Chocolate & Midwest Unknown →