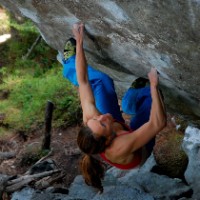 Chris Sharma does not eat Paleo/Zone/WTF. In fact, I can’t think of one truly elite athlete that follows any incredibly strict diet. I would bet they are conscious of what they eat because they know their bodies, but not religious about it. Yet there are legions of people out there trying to improve their amateur sports performance through bizzare diets. I would call them idiots, but it’s really a form of gullibility brought on by wishful thinking.