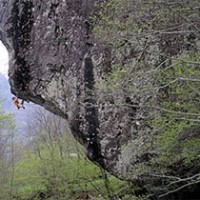 Out of all the different climbing videos that have been put out over the years the segements in Dosage 3 & 4 featuring Dave Graham cruising around the boulders of Ticino, Switzerland are still some of my favorites. The segments are capped off by Graham doing the FA of, oddly enough for doses about bouldering, a route he bolted on a huge free-standing boulder in the tiny village of Sonlerto. The route featured a V13 section right off the bat followed by back to back double-digit boulder problems separated by a small rest. Graham called the route Coup de Grace and suggested a grade of 5.15a.

Several years have passed and not much has been heard about Coup de Grace or the other climbing in Sonlerto like Graham’s unrepeated Kings of Sonlerto (V14) and the infamous Cart Project, presumably in part because of access issues.

It was with great intrigue then that I read this update on Italian climber Gabriele Moroni’s blog earlier this month about a trip he had taken to Ticino:

I was very interested to try Dave’s Coup de Grace to see if it could be a possible project for the near future! Except for the first hard boulder(8b bloc) that needs some more work and better conditions, I did all the other sequences very well so I’m pretty psyched to try seriously next fall!

Moroni was apparently so psyched that he didn’t wait until fall, but rather he returned to Sonlerto and nabbed the 2nd ascent of Coup de Grace after 6 days of work, suggesting a grade of 5.14d based on finding an easier V11 sequence for the bottom boulder problem. Writing on his 8a scorecard he had this to say about the climb:

Probably the best extreme granite route in the world! more like 9a in my opinion,but i could be wrong. found an easier(for me)beta for the start at about 8a bloc instead of dave’s beta at around 8b bloc! thanks to all my friends Pellet,Niki,Max,Dani,Pik,Simo and many others for the big support!

Check this link to watch some footage from Dosage 3 of Graham working the route.

Update: Check Moroni’s blog for a nice update on his ascent including several pictures

Update #2: Footage of Moroni’s ascent can be seen here