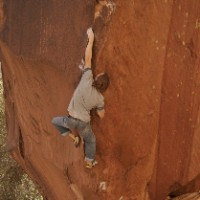 Under the radar crusher Pete Lowe has added a new problem to the boulders of Red Rocks, NV that is among the hardest in the area.  Dubbed The Shining Path and weighing in at a proposed V13, the problem climbs a tall, beautiful arete over a sloped landing.  In a recent interview with DPM Lowe described the problem like this:

The line climbs straight up an overhanging arête of chocolate brown bullet rock.  The grips are sparse and the crux dyno off of a terrible sloping pinch to a sloping edge sits at around twenty feet.  After that you still have ten more feet of technical climbing until you’re standing on the summit.  It is the most breathtakingly aesthetic and intimidating line I have ever aspired to climb.

Here is some video of Lowe’s attempts on the line which gives you a good sense of what the problem is like:

In the end Lowe ended up using a slightly different start when he sent the line although he’s indicated a lower start is definitely possible and would be somewhere in the V14 range.

For more on how the problem got its name check out this post on B3Bouldering and click here for move by move photos of the send.

Pete Lowe on The Shining Path (V13) in Red Rocks