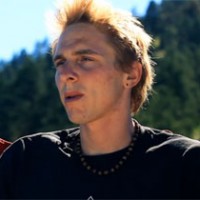 Late last year I read a really interesting interview with Australia’s Chris Webb Parsons on an excellent Australian blog which I was psyched to share with everyone.  Best known here in the States for his repeat of Wheel Of Life (V16) in his native Australia as well as blowing up his shoulder making quick repeats of hard lines in Hueco, I found Chris’ thoughts on the state of the climbing industry in Australia to be quite interesting.  Unfortunately, just days after the interview was posted that site was hacked and the owner decided to pull the plug.  I ran into Chris at the recent Outdoor Retailer and mentioned how much I liked the interview, and he graciously offered to send it over so I could share it with everyone.  So here it is:

You have been traveling a lot of late in between America, Europe and Australia and seem to be the only full time Australian climber still having a good crack at climbing fulltime. For me personally and I am sure many others this is very inspiring. As a World class climber coming from Australia where the support from the local companies is not as good as Australian climbers would hope. What drives you these days to keep having a crack?

First of all thanks for the kind words mate.

When you said the words “having a crack” its exactly what im doing. Although I do receive financial support from my sponsors Evolv and Black Diamond which I am very great full for, it is not nearly enough to live off and I am not close right now to living as a professional climber.

I since picked up Evolv as a shoe sponsor. Black Diamond is still supporting me and both sponsors do help me out a great deal.  I still have to work a normal job and I know if I did not have to do this I could be climbing much harder and climbing many more things.

I feel being an Australian climber has its good points and its bad points.

The climbing industry is not nearly as big in Oz as it is in USA and Europe etc… it seems like the money is just not there in Australia for companies to sponsor Australian climbers with more financial support.

I really do believe that Australia has potentially some of the best climbers in the world it’s just the whole lack of support thing that stops them from moving forward with their climbing.  At the end of the day Australia has some great rock and climbing means different things to everyone so maybe most of the top Australian climbers are happy just doing what they are doing now and if so that’s great.  I do worry about my future all the time, but I do believe you only live once and if I don’t try and live my dreams now I might have regrets when I’m older.  There is no right or wrong with how you choose to play the game of life.

During the last few years some of the top Australian climbers have resorted to apprenticeships, fulltime work and even University because the support was not really there for them to continue to live the dream of a full-time climber.  Do you see this changing in the future? Do you have any suggestions from what you have seen while overseas of how Australia can change this so we can have more “PRO” climbers out there?

Unfortunately short-term I do not see much changing in the climbing industry in Australia.  I know that the sport of climbing is going to get bigger and better as time goes on but it’s going to take a while.  I hope that I do inspire other Australian climbers to go out there and try and live their dreams no matter what.  I believe if more Australian climbers keep traveling and pushing the sport then it has only one thing to do “Grow.”

The thing I see when im in USA for example, is that more people are keen on climbing, but most importantly there is more people who are keen to keep pushing the sport forward and make it grow.  One thing I believe to be the reason the sport is not going so well in Australia is The Sport Climbing association.  A few years ago When I was a junior the sport seemed like it was moving forward.  All the open climbers in Australia would show up to competitions and compete to see who would be best on the day and to see who could take home the money.  Because the Open competition was so heavily contested and so competitive the Junior climbers (myself at the time) had something to look forward to being a part of and we had more people that inspired us to get stronger and better.  It’s like any sport. You put more effort into the Pro climbers and the juniors will follow just like in Soccer, basketball etc….

Its important never to forget about the juniors but they need something to aim towards.  What happened In Australia was the SCA focused to heavily on the juniors. The parents of the Juniors got onto the SCA board and started running the sport.  They stopped the money for the Open climbers and they said that the open climbers should be happy enough just to compete against each other without money being involved so open climbers started not turning up to comps and went rock climbing instead.

The thing is with climbing, open climbers can test themselves on the rock outdoors and please themselves and their sponsors so there has to be something else that will draw them to participate in comps and that something I believe is money.

I still believe as soon as the money comes back the sport will start to grow again.

Over the last few years in-between injuries you have still been training like a mad man and are quick to bounce back into better shape than ever. What have you learnt most from all the training you have done over the years? Do you approach it differently?

I have learnt many new training methods over the years, but I think most of all I’m just much smarter and more mature with my training and climbing.

I believe some of the climbing methods I have adapted to my climbing has helped me get up so many hard climbs. I have been doing some coaching of late and I am confident in one 2 hour session I can have someone (no matter what the level) climbing better than they ever have before.

I have noticed you have been focusing on First Ascents, have you changed your training for that?

My training is always changing and I think thats very important but I have not changed my training for first ascents. I have been interested in doing first ascents lately because it is honestly one of the greatest things to do in climbing. Finding a piece of rock, cleaning it figuring out the moves and then trying to put it together, knowing you are the first to do something and getting to name it is a very special feeling no matter what the grade.