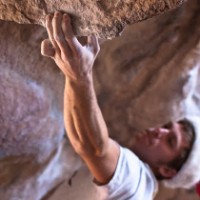 The winter season is in full effect in Hueco Tanks, TX with several interesting sends going down in recent weeks:

← Rich Simpson & The Burden Of Proof
Potential New 5.14 At The Puoux →