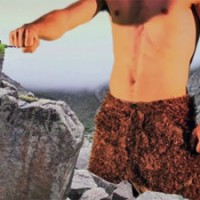 Louder Than 11’s 4 part series called Lincoln Lake GIANTS! about the bouldering at Mt. Evan’s Lincoln Lake came to an end this week so now seems like a good time to revisit the entire series.

When I posted about part 1 of Lincoln Lake GIANTS! in conjunction with the release of the now infamous Enter The Wolvo there was a lot of discussion around both movies.  One of the things many people questioned about the GIANTS series was that the acting was not what one would call great, and it was hard to tell where the storyline, not something one sees in climbing movies usually, was going.  I myself wondered these same things, but after seeing the series to its conclusion I have to say I was pretty entertained by the whole thing.  The storyline they constructed actually brought a little bit of a smile to my face when I saw how it ended.  Plus, even if you hate the story and the acting there are plenty of FUN looking boulders getting climbed so there is always that to fall back on.

Here’s all 4 parts of the series in case you haven’t seen them all: