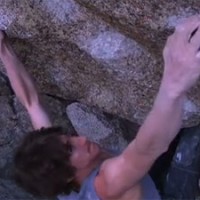 Stop me if you’ve heard this before:  another week, another hard boulder added to the talus near Mt. Evans’ Lincoln Lake by Dave Graham and Daniel Woods.  This has become such a consistent theme throughout the summer of 2010 that I thought it might be helpful to create a Mad Lib to help streamline the reporting process .  Here’s what I came up with:

So if I was going back and reporting on the developments that can be gleaned from reading the 8a scorecards of Graham and Woods over the weekend I might fill out the Lincoln Lake Mad Lib like such (feel free to play along at home):

The other day Dave Graham did the FA of We Can Build You at Lincoln Lake suggesting a grade of V14. It was quickly repeated by Daniel Woods and both were reportedly very psyched! about this sick new development.

Unfortunately, the usefulness of this Mad Lib may be short lived as the clock is seriously ticking on the season at Lincoln Lake.  In fact there may only be a single digit number of days left, which is not great news if you flew to the States from Finland and promptly blew a huge hole in your finger like Nalle Hukkataival did.

Update: Jamie Emerson was on the scene with a nice photo recap of the weekend’s action.  How could I not include the Sheriff in the Mad Lib????