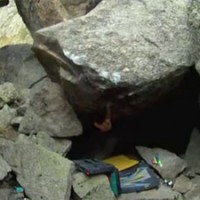 Another day, another hard boulder problem at what is quickly becoming one of the premier hard bouldering destinations in the U.S., Mt. Evans, CO’s Lincoln Lake.  Yesterday Daniel Woods & Dave Graham crossed another hard boulder off the project list when they did the FA and first repeat respectively of Warrior Up.  Both climbers have suggested a grade of V15 for this problem putting it on a short list of V15 or harder boulders in the U.S.

Writing on his 8a scorecard, Woods had this to say about the problem:

The roof proj. Sick power line revolving around 3 moves. The first non hold i have grabbed. took 3 days of hard sessioning. I think hardest in area so far.

While Graham had this to say on his 8a scorecard:

the amazing roof project. very powerful, yet still very technical. The first move is big trouble, it took four days of work just to do it once, and then it never really got any easier! Definately the hardest up in the area, and the first boulder I have done if this level in some time now. Seems certainly 8c, but we will see right…

8c in Wolverine Land from Courtney Sanders on Vimeo.

The summer of 2010 has already yielded an astonishing number of hard boulders at Lincoln Lake, an area long overlooked by climbers when it came to high difficulty climbing.  In just the past few months at least 5 boulders with a proposed grade of V14 and harder have been established there with Woods & Graham having either established or repeated all 5.

Many others have been climbing in the area as well, including B3Bouldering‘s Jamie Emerson who recently nabbed a repeat of Evil Backwards (V14) which Daniel Woods first did back in June.  Here’s some uncut video of Jamie’s send: