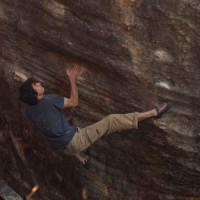 Paul Robinson Back In Rocklands

Paul Robinson recently embarked on a multi-year road trip around the world and his first stop was in Rocklands, South Africa. He’s been chronicling the trip on his new blog where he’s checked in with reports on his quick repeat of Daniel Woods’ Derailed (V14) as well as his efforts to do the first repeat of the Fred Nicole testpiece Monkey Wedding (V15?).

Additionally, according to this post on 27crags Paul also did the first ascent after significant breakage (FAASB) of Black Eagle bumping the grade on that problem to V14 (and changing the name to Bleagle) with a sit start still waiting an ascent.

← New Belay Devices In The Offing
(Another) Hard FA From Daniel Woods At Mt. Evans →

29 Responses to Paul Robinson Back In Rocklands