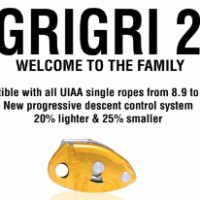 New Belay Devices In The Offing

Via GearCaster and Western Colorado Climbing comes news that 2011 will bring a major redesign to the main belay device in most people’s lives: the Petzl GriGri.  Promising a lighter weight, a “progressive descent control system” and a compatibility with a wider range of rope sizes, the GriGri 2 will be available some time in 2011.

Here’s a promo video from Petzl:

The GearCaster’s post on the GriGri 2 also has additional info on a new Universo device from Petzl, a new belay carabiner from Black Diamond and a new belay device from Mammut.  Definitely worth checking out if you are into that sort of thing.

With respect to the new GriGri, I’m interested in hearing thoughts from current GriGri owners about whether or not you plan on dropping the cash to upgrade to the new model.  Obviously it’s too early to make any sort of real judgement about the new device, but this is the internet and we need something to talk about I’m curious to hear people’s first thoughts.

27 Responses to New Belay Devices In The Offing