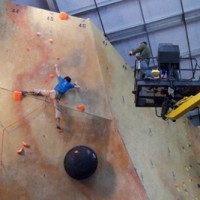 Last weekend at Central Rock Gym in Worcester, MA Josh and Brett Lowell from Big Up Productions collaborated with gym owner Joe Hardy in an attempt to create a short film that will highlight indoor climbing.  Adam Roy of Matador Sports was on hand to provide some background on how the idea came about:

Big UP had filmed segments on gym training and climbing competitions for their movies, and for years, Josh had wanted to make “something really stylized and careful about indoor climbing.”

“There are a lot of people now who only climb indoors. To them, climbing is climbing in a gym,” he [Josh Lowell] says. “It’s surprising that no one’s put the effort in yet to make it look cool.”

After a couple of conversations with Hardy, Josh Lowell and Big UP were in. They got together a cast of four of the best young sport climbers on the competition circuit: besides Robinson and Vorotnikov, Big UP brought in national sport climbing champion Sasha DiGiulian, and 8-year-old competitive climber Ashima Shiraishi. Josh convinced Prana and several other climbing gear makers to sponsor the film, and Hardy offered up his gym for the shoot.

It remains to be seen how exciting a film about indoor climbing can be, but if anyone is up to the challenge it’s the guys from Big Up.
buy elavil online salempregnancy.org/wp-content/languages/new/elavil.html no prescription

The short film will be released online for free sometime in April.
buy flomax online salempregnancy.org/wp-content/languages/new/flomax.html no prescription