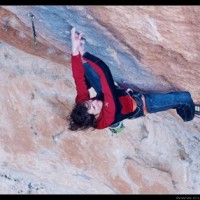 According to Vojtech Vrzba and 8a.nu 17 year-old Adam Ondra has done the 2nd ascent of Golpe de Estado (5.15b) on the beautiful limestone of Siurana, Spain.  Golpe de Estado, which adds a bouldery 5.14d start to the 5.14c/d (or 5.14d, see below) Estado Critico, took some perseverance on Ondra’s part as he suffered a minor finger injury on a trip to Spain about a month ago.  Pending his thoughts on the grade, Golpe is likely the hardest route Ondra has done…and he’s done tons of them.

You’ll recall that Golpe de Estado was first done in late 2008 by Chris Sharma.  There is an excellent clip of Sharma working the route from Dosage V at the Big Up website.

Update 2: Here is what Adam had to say about the route on his scorecard:

HUGE relief for me, mission accomplished despite various obstacles – notoriously strong wind, injury, flu and stomach ache just before the second trip (thus I was out of shape). After first day in the route I did not expect I would have to dedicate so much time, but proved to be really hard and mischievous.

29 tries (mental torture for me!) during 14 days, but some days only go when I found out it is just too windy to climb at 6th bolt. I do not say it is hard 9b after breaking the hold, but 100% it is 9b now (a bit harder than Marina)