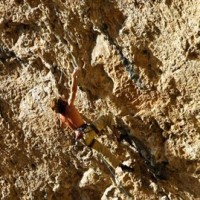 As expected, Chris Sharma has done the first ascent of a possible 5.15b sport route in Spain, but it wasn’t the infamous First Round, First Minute project at Margalef (which he is still reportedly very close to doing).  Instead Sharma ticked off the Neanderthal project in the cave at Santa Linya to yield his 3rd possible 5.15b after Jumbo Love and Golpe De Estado.

Seen in Dosage V, Neanderthal follows a long and sustained 40 meter line with a hard dyno near the top of the wall.  After two years of work, Sharma was able to climb “really solid and very psyched” to reach the anchors of Neanderthal with a cheering crowd looking on.

Interestingly enough, Neanderthal wasn’t Sharma’s main focus lately, but poor conditions in Margalef led to a change of plans.  Commenting on their blog, the guys at Big Up shed a little more light on things:

A quick heads-up: We got a last minute call from Sharma the other day, that he was about to send First Round First Minute, so Brett jumped on over to Spain to shoot it. Margalef got snowed out, so they went to Santa Linya instead, and today Chris did his other mega-proj, Neanderthal. Probably another 9b. There is footage of him trying it in Dosage 5.  Now they have a few more days to go back to FRFM and try to get it done too… We will be making the footage available as a download from our site as soon as possible. More info to come… -Josh

After a quiet middle part of the year, Sharma seems poised to finish 2009 strong with this 5.15 FA under his belt and another possibly on the way.  Stay tuned…

Update: Photos of Sharma climbing on Neanderthal from Pete O’Donovan

Update #2: TheLowDown chats with Dave Graham to get more accurate details about the route itself

← What Can You Say About The Grade?
Adam Ondra Flashes V14 In Switzerland →