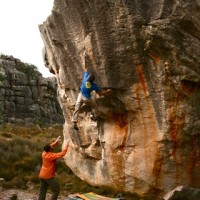 The American sport climbing scene has shifted to Europe with Dave Graham, Joe Kinder, Daniel Woods, Jon Cardwell, Isaac Caldiero, Alex Honnold and others all holding it down in France at the moment.  Here are a few bits of news from their travels as well as the exploits of others back here in the States: