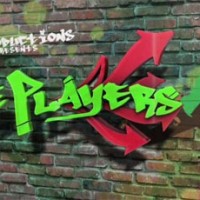 In his/her section, each climber speaks candidly about climbing motivations and personal climbing goals.  For example, Alex Puccio speaks about the competition between female climbers and the need to continually raise the bar,  and Daniel Woods shares his desire to increase the popularity and awareness of climbing.  Dave Graham talks about…well it’s hard to say what exactly he was really talking about.  Either way, it was interesting to see those various aspects of everyone’s personalities.

The video did not hurt for interesting footage.  Shots of Chris Lindner deep water soloing in Vietnam, for example, were impressive as were the shots from South Africa.  Climbing destinations were diverse and the camera work was good.  Somewhat distracting, however, were the filler shots between climbs.  While some were interesting, a number seemed to function only to fill  time.  Overall, however, the movie kept a good pace and was enjoyable to watch.

Trailer for The Players

If you enjoy seeing some of the best climbers the U.S. has to offer climbing hard in a variety of disciplines, The Players is something you will definitely enjoy.  Check it out and let me know what you think!

Read more about The Players in this interview I did with filmmaker Brian Solano.

30 Responses to The Players DVD Review