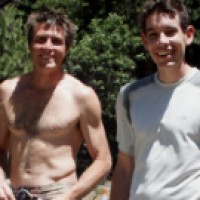 Thwarted by bad weather in a recent attempt to link up a route on El Cap and the NW Face of Half Dome in a day, Alex Honnold and Sean Leary tried to up the ante Wednesday by attempting to climb 2 El Cap routes AND the NW Face of Half Dome in one 24 hour push.  They made quick work of the Salathé Wall in a record time of 4:55 before dispatching the Nose in 7 hours.  Unfortunately, hot conditions on the Nose took some of the wind out of their sails and they decided to end the day there.  Still, 2 routes on El Cap with one being a new speed record is not a bad way to spend your Wednesday!