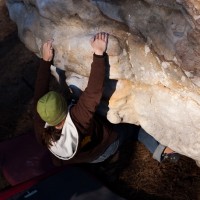 Our trip to HP40 in Alabama wasn’t a complete wash, but as far as climbing was concerned it sure felt like it.
buy clomid online https://noprescriptionbuyonlinerxx.net/dir/clomid.html no prescription

Before we left I didn’t feel all that prepared, and it showed once we started climbing on the beautiful first day of 2009.  Last week I posted a short list of problems I wanted to send, but a lack of enthusiam, lack of strength and lack of skin combined to prevent me from sending any of the problems.  Here is the rundown:

Unfortunatley there was not going to be any chance for redemption as it rained the night of the 1st.  After waiting it out for half of Friday we made the decision to head home as the forecast for Saturday called for more rain.  A bit disappointing, but I think everyone had a fun trip nonetheless.

I also failed on the picture taking front.  Having never climbed in the dead of winter I was a bit surprised at just how short the days can be.  We didn’t start climbing until almost 11 am and before I knew it the sun was going down and I had barely taken the camera out of the bag!  Luckily, Mrs. Narc picked me up and helped out with a few shots of her own.  Here are a couple of shots from our day of climbing at HP40: Danny hanging out near the top of Mainline